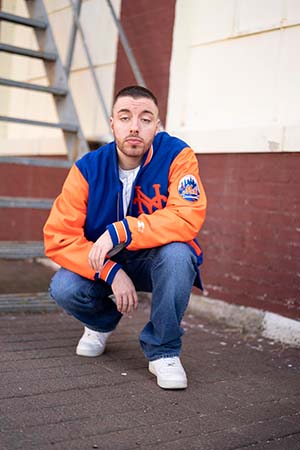 Max Coughlan has been called a Hip-Hop historian. His ability to develop an instant rapport with his celebrity guests, and conversational style, creates a unique interview experience for guests as well as viewers. Max created and began producing and hosting Sports and Hip-Hop with DJ Mad Max in 2018. Over three hundred interviews later, the show continues to stream live on a variety of platforms, is available for download on all major podcast apps and has a worldwide fanbase.

Raised in Norwalk, Connecticut, Max spent his youth studying all kinds of Hip-Hop. He began deejaying and promoting independent artists on social media when he was in middle school. His massive playlist included Nas, Wu-Tang Clan, Big L, DMX, Rakim, Big Pun, and Kool G Rap as well as rappers of the 2000’s like Drake, Lil Wayne, and A$AP Rocky. He found a love of lyrics over beats that came together and told a story.

His love of Hip-Hop eventually led him to St. John’s University in Queens, New York, an area steeped in Hip-Hop history. He quickly became Executive Head DJ, then VP/Programming Director, and eventually President of St. John’s University’s WSJU Radio. He began Sports and Hip-Hop with DJ Mad Max during his freshman year. Through his show he began working to bridge the gap between old and new school Hip-Hop. With his vast Hip-Hop knowledge and unique interview style, he is introducing his generation to the legends that started it all. The show features a wide variety of guest stars, including Hip-Hop artists of the past & present, R&B artists, producers/DJs, industry managers, pro athletes and even actors. It informs listeners about up-and-coming artists, as well as artists who played important roles in the history of Hip-Hop.

In March of 2020 Covid-19 hit NYC and St. John’s University closed their Queens campus. Max new if his show was to continue, he would have to adapt to the world’s new reality. Within the first week of quarantine, Sports and Hip-Hop with DJ Mad Max went live from his home studio. During this time, his guest list grew to include some of the biggest names in the industry. He interviewed Bob Costas, Fat Joe, Kenny “The Jet” Smith and Michael Rapaport, actors Lin Shaye and Kane Hodder, Producer/DJ Statik Selektah, DJ Kay Say, and DJ Drewski, R&B Legend Brian McKnight, Hip-Hop legends MC Eiht, Father MC, Craig G, and DJ Kaygee, as well as the hottest artist in the game Fivio Foreign, DaniLeigh, Ayo & Teo, and 24kGoldn to name just a few. Sports and Hip-Hop with DJ Mad Max quickly became the hottest show in college radio.

In 2021 Max graduated from St. John’s University with a BS in Communications. During his time at St. John’s University, he started his own radio station MAD MAX RADIO, grew his social media following, and increased his show’s distribution platforms. He has gone on to interview Henry Winkler, John Amos, Anne Heche, Rapper Jim Jones, Darryl “DMC” McDaniels, as well as many others. His relaxed demeanor and ability to listen, allows guests to tell their stories. In nearly every interview there is some interesting fact that the guest has never shared before. Max’s interviews have been described by listeners as “eavesdropping on a conversation.” It is this unique format that makes Sports and Hip-Hop with DJ Mad Max a must see for Hip-Hop and sports fans alike.

Max’s knowledge, attention to detail, and interview style, has made him sought after by many artists and managers. He takes the time to understand the artist’s journey, and gives them a platform where they can speak freely. In December of 2021, Max was invited by Chicago Rapper G-Herbo’s management to attend his New Jersey Concert for his 25 Album Tour, and to interview him after the show. Max conducted an in-depth tour bus interview in just under three minutes. His ability to ask interesting and informative questions under pressure is what makes him one of the best in the game.